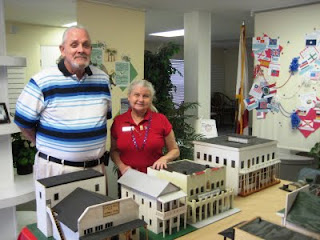 Museum President Shows Off New Building Models
LABELLE, FL. -- LaBelle Heritage Museum president Joe Thomas and Jayne Lofton Gourley, a great granddaughter of William Hardy Poole, are shown with some of the models that will be featured in the museum's new location at 360 North Bridge Street in downtown LaBelle, Florida.

The new building was open for preview on the 4th of July.

Museum supporters Jeannie and Wayne Horlacher, Jeff and Terri Lazar, Marie Hoffman, Ron and Donna Baines, Mary Bartoshuk, Nikki Yeager, and Irene Doub, along with Supervisor of Elections Lucretia Strickland who loaned matching U. S. and State of Florida flags for the event, are among those who made this special preview of the 100 year-old William Hardy Poole building possible.
The existing museum is located on Lee Street, just south of the Sheriff's Office.
Posted by Don Browne at 11:41 AM