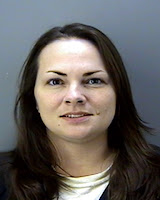 LABELLE, FL. -- The triple homicide trial of Ruby Yolanda Parker continued this afternoon at the Hendry County Courthouse with testimony from an expert witness on cocaine and from the ex-wife of deceased Richard Harker on domestic abuse she received from him.

Harker killed himself with a shot to the head after crashing through a police roadblock in the early morning hours after the Clewiston homicides.

Parker, who was with Harker, is claiming she was held by Harker against her will and was only doing what he demanded to protect herself and those around her.

Parker is on trial for the Clewiston murders of Joey Glenn Whitaker, 52, wife Carolyn Cox Whitaker, 53, and Myrtle Lee Cox, 80, Carolyn's mother, on August 15, 2006. Harker had a business relationship with Joey Whitaker and was visiting the Whitaker home to talk about some money Whitaker owed Harker, Parker told the court Wednesday.

Dr. Frederick W. Schaerf, a Fort Myers psychiatrist led off testimony for the defense with answers to questions about the effects of cocaine on the brain. Parker and boyfriend Harker were both on cocaine at the time of the Clewiston murders.

Dr. Schaerf did not examine Parker, nor had even met her, but gave detailed medical explanations of how cocaine may affect the body, brain, and behavior.

The defense's primary witness today was the ex-wife of Harker, Mary Melissa Harker. Mrs. Harker was to testify about the spousal abuse she had suffered after marrying Harker and moving to Clewiston.

Mrs. Harker, then Mrs. Ward, met Richard Harker at the Glades Correctional Institution in Belle Glade. She was a correctional officer and he a prisoner, serving a 22 year sentence for 2nd degree murder.

Mrs. Harker grew up in Clewiston, worked at the Glades prison for 11 years, and met Harker through her then husband Robert Ward, also a correctional officer at Glades. Mr. Ward supervised a farm detail that included prisoner Harker.

As the marriage soured between Mrs. Harker and Ward, a new illicit relationship began between her and Harker. Harker would sneak into a prison farm office and make telephone calls to her at home, she told the court.

Eventually, Harker got caught making the calls, was disciplined and Mrs. Harker resigned from her job.

When Harker was transferred to a Miami prison, and then to Desoto Correctional in Arcadia, Mrs. Harker was working at the Hendry Health Department and a second job at Walmart. She would write to him with an assumed name, she said.

After getting a divorce from Ward, she started visiting Harker at the prison every weekend. Then married him while he was still in prison.

Harker got an early release on the murder charge due to a Florida court ruling, and the couple took up living in Clewiston where Harker got a job within weeks with an electrical contractor.

Mrs. Harker said she soon found out how unpredictable and abusive  Harker was, hitting her, dragging her by the hair, and threatening her and her children.

After she inheried 22 acres of land in Hawthorne, Florida they moved there and with her money began Harker and Associates, doing home inspections, building home foundation pads, and eventually doing hurricane cleanup work in Mississippi and later in Clewiston, Florida after Hurricane Wilma.

Ruby Parker had an affair with Harker in Mississippi, working with him in storm cleanup. Mrs. Harker had surmised there might be an affair.

Mrs. Harker suffered through the physical abuse for years, but she told the court, finally went to a shelter with her kids in fear of her life. Harker managed to find the shelter location and continued his threats by phone, and she allowed one of the children to go with him, after more demands from him.

After counseling at the shelter, she filed a court injunction against Harker, and got her child back. Parker showed up at Harker's side at the court hearing.

Mrs. Harker continued her testimoney, telling the court she received a phone call regarding Harker killing himself in Clewiston while she was still living in the shelter. She traveled to Clewiston for the investigation and remained in the shelter for another few weeks, even though Harker was now dead.

The defense rested it's case this afternoon after Mrs. Harker's testimony. Closing arguments from both sides are expected beginning at 10 a.m. Friday at the Hendry Courthouse in LaBelle.  John E. Duryea, Jr. is the presiding judge.
Posted by Don Browne at 6:11 PM