$7 Million Road Under Construction In LaBelle 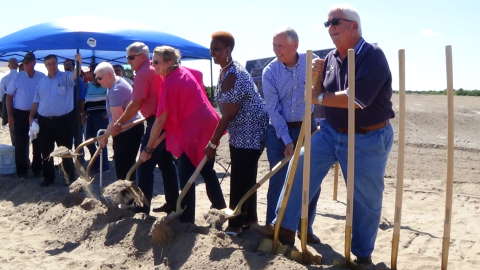 LABELLE, FL. -- The ground breaking for the new Helms Road Extension from SR 29 to SR 80 took place Wednesday afternoon at 2 p.m.  On hand were Hendry county and city of LaBelle officials, department of transportation and county engineer staff and dozens of others involved in the planning and design of the new two-lane roadway expected which should be completed by 2017.

The $7 million initial phase of construction is for a new two lane roadway with accommodations made for an ultimate four lane divided facility. The road will allow travelers to bypass downtown LaBelle when traveling to and from SR29 and SR80. The project will encompass approximately 2.67 miles of new roadway along with intersection improvements at SR 29 and SR 80. 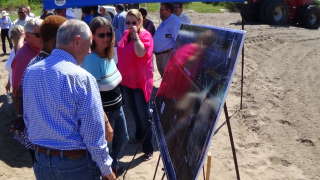 The road will open up former citrus grove and pasture land to possible development as well give entry to one of LaBelle's first speculative subdivisions, hundreds of small lots which have been land locked for many decades. The parcel contains very small lots which could not actually be built upon because there has been no road access to the subdivision.

The new roadway ends west of the Walmart store now under construction west of LaBelle and exits directly across from Grandma's Grove RV Park.

Construction of the Helms Road Extension project is being funded by the Florida Department of Transportation. The first phase of the project is expected to be complete by the Summer of 2017, with the help of Johnson Engineering, Inc. and Mitchell & Stark Construction Co., Inc. Land clearing is now taking place along the nearly 3 mile long strip of land south of SR80.
Posted by Don Browne at 6:31 PM