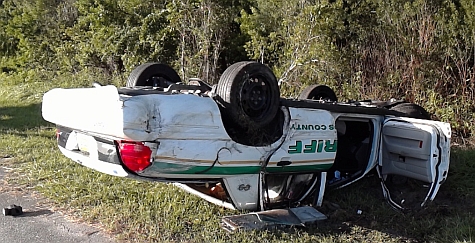 SEBRING, FL. -- A Highlands county Deputy suffered serious injuries in a crash Tuesday morning at 7:30 a.m. while attempting to avoid a crash with a minivan.

A 2009 Chrysler minivan driven by Rae W. Cole, 72 of Sebring was traveling eastbound on Tanglewood Drive approaching a stop sign at southbound US 27 as a marked Highlands County Sheriff’s Office Patrol vehicle was traveling southbound on US 27 in the center lane.

According to Deputy Michael J. Helms, Cole approached the stop sign at US 27 and stopped and looked left at southbound traffic and failed to observe his on-coming vehicle.

Deputy Helms then took additional evasive action and steered to the right. As a result, the patrol car began to rotate clockwise, entering into a slide.

The patrol car traveled at an angle in a southwest direction across all lanes of southbound US 27 and entered onto the grass shoulder, still in a slide at an angle. It's left front then collided into a utility pole. This impact caused the vehicle to rotate fully clockwise, lifting it off of the ground and then came down onto the driver’s side and overturned approximately 2 times and came to rest on its roof, facing east, near the wood line east of US 27.

No contact was made between the two vehicles. Cole pulled onto the east shoulder coming to rest and called 911 and attempted to render assistance to the deputy. Deputy Helms was transported to Florida Hospital with non-life threatening injuries. Cole had no injuries.
Posted by Don Browne at 3:18 PM