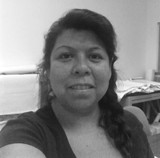 From The Firehouse Community Theatre's "The Dalmatian Review"

LABELLE, FL. -- Myra Johnson is beginning her second term on the LaBelle's Firehouse Community Theatre Board of Directors.

She also is the Hendry County Planning and Zoning Coordinator, the Historian of the American Legion in LaBelle and her favorite job is being the mother of "4 amazing kids", Alyssa, Bryce, Corbyn and Novie.
Myra graduated from Immokalee High School, where she took drama classes. After graduation she enlisted in the Navy for 9 years, 2 months and 20 days and after traveling with the Navy to places such as Spain, Italy, Greece, and Israel (to name a few), and then she moved back to LaBelle in 2001, because “I missed the small town life.”

Myra got involved in community theater when she was stationed in Pensacola where she starred in "The Best Little Whore House in Texas" at the Stage Crafters Community Theater in Fort Walton Beach. Then, in 2005 Corbyn wanted to participate in the Firehouse Children's Summer Theatre Program, where she worked back stage with the kids.

Two years later, looking to get “some alone time”, She auditioned for "I'll Be Back Before Midnight". Since then, her "alone" time has turned into family time, since everyone with the exception of her husband Rich participate in the theatre.
Posted by Don Browne at 8:32 AM