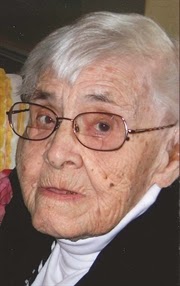 Evelyn A. Foss, age 106, of LaBelle, passed away September 3, 2014 in LaBelle from complications of advanced age.

She was educated in public schools in Columbus Junction and at Parsons College in Fairfield, Iowa.

Evelyn and August were involved in their church, boy scouts, girl scouts, and the Avion Travelcade Club. Evelyn spent the first forty six years of her life in Columbus City, Iowa before moving to Largo, Florida. She later moved to Old Town, Florida where she lived forty five years before moving to LaBelle, Florida to be near her daughter Royene.

Cremation and Funeral arrangements are being handled by Akin-Davis Funeral Home - LaBelle, FL and Rick Gooding Funeral Home in Cross City, FL.
Posted by Don Browne at 10:42 AM