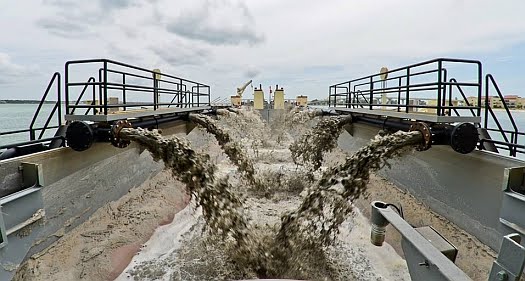 CLEWISTON, FL. -- The Army Corps of Engineers said this morning at a Jacksonville press conference that with the forecast amount of rain, that may last for seven hours, over Lake Okeechobee through next Monday there is a possibility that the water will overflow the dike at three culvert construction sites located in Glades, Hendry, and Palm Beach county.

The Corps described the situation as "significant over topping" of the dike a levee that is 143 miles long.

The Corps said inspections of the dike shows no seepage anywhere at this time. The last time the levee was breeched was 1928 when thousand drowned around the lake.

The construction sites are culvert cofferdams that may overflow in three area around the big lake. The Corps does not anticipate a significant breech of the dike itself. Releases of water are intentionally continuing into the Caloosahatchee River to the west and St. Lucie river to the east to lower the water level of the lake.

For the last year and a half to two years the Corps has been raising the height of the dike.

Communities around the lake in the affected areas were this morning subject to mandatory evacuations including the City of Clewiston where one of the cofferdam culvert construction site is located, and the Harney Pond near Lake Port a second, and the third in Pahokee. The overflow will contribute to localized flooding in the immediate area.

18.77' is the overflow height and record water level of the dike around the 2nd largest freshwater lake in the U.S. and it is currently at the 13.7' level. 12.5 to 15.5' is the normal operating range for the water level. One foot of rainfall in general brings the water level in the lake up three feet. 15' inches of rain is expected during the storm.

Additionally, after the storm passes by, there will be eventual water flowing downstream flow from the Kissimmee River basin north of the lake.

Photo: Courtesy U.S. Army Corps of Engineers/Facebook
Posted by Don Browne at 11:46 AM