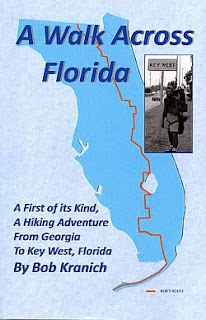 Excerpts from A Walk Across Florida by Bob Kranich
Well I was finally in the Keys. They were originally inhabited by the Caloosa and Tequesta Indians. The name Key is derived from a Spanish word, cayo. Its definition is “small island.” When the Spaniards first arrived they were naturally looking for gold. There was none of that here. There also was not any drinking water in the Keys. What they did do was to log the very old Mahogany trees. They took some of the Caloosas that they could capture as slaves to do their work for them in Cuba and some of the other islands in the Caribbean that they were settling.

The Keys have a true tropical climate and are similar to the Caribbean. They were built by plants and animals. The Florida Keys are exposed parts of ancient coral reefs. This reef was along the edge of the Florida Straights and according to Wikipedia, “It is the third largest barrier reef system in the world.”…...

An old road paralleled the new highway. It was very possible that this old road was on the original roadbed of the Florida East Coast Railway. I decided that I would hike it as much as I could. As I walked along, sometimes the thick and impenetrable mangroves would hide the busy main road and commercial establishments and block the refreshing ocean breeze. At other times the road ventured near the ocean and the beach, and then the hiking was ideal…..

I noticed that the water was turquoise blue-green. I came to a barricade and had to follow a footpath to the main highway. I found out why: there was a fairly short bridge, but it crossed a waterway. The waterway had shear vertical walls cut down into the coral of the island. The walls looked to be around 15 feet high. I was lucky--just as I got my camera out a motor boat blasted by. It made a good size comparison.

I found out that this waterway is called the “Cut.” Officially it is the Marvin Adams Waterway. It seems that in the early 50’s Mr. Adams was able to purchase 50 acres of land on Key Largo at both the narrowest point on the Key and the middle. Mr. Adams had the idea that they needed a shortcut through the Key which would cut in half the distance and time to go from Black Water Sound (Florida side), to Largo Sound (Atlantic side). He did the cost study and worked on the permits and then was introduced to Matthew “Barney” Waldin. Mr. Waldin was an inventor and builder, and he had patented a machine that could cut deeply into coral rock. This machine had two huge caterpillar diesels. One would move the machine and the other would cut on the side just like a saw.

It took one and one half years to complete the digging and blasting. What “Barney” Waldin did was cut the sides down to where the water line was going to be and then blast out the center. Neither end went out into the Sounds until the entire cut was finished in 1961. He did not charge Marvin Adams for the work. Instead they made an agreement that he would do it for the valuable fill that was removed.