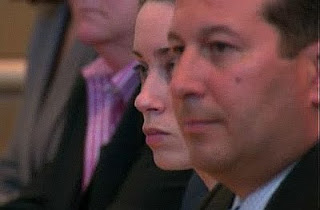 Must Report In Orlando Within Two Weeks

Over objections by defense attorney Jose Baez, Chief Judge Belvin Perry ordered today, one week after a hearing on the matter, that Casey Anthony must report to the Orange County probation intake office by noon August 26.
Anthony's defense team had argued that she had already served her one year probation period while in the Orange County jail, awaiting her murder trial.
Perry found that the Judge on that case, finding she was found guilty of stealing and endorsing checks not her own, had orally ordered a probation to be served upon her release from jail. An error was apparently made when the order was written and filed with the clerk of the court, omitting the phrase specifying probation after release.
The Florida Department of Corrections had sent an officer to the jail while Anthony was being held, and after one year gave her a letter saying she had served her probation commitments.
Perry also indicated Anthony's address will remain a secret when she registers with the probation office.
Her whereabouts have been a mystery since her release from jail last month, although speculation has her either in the Columbus, Ohio area or at a former attorney's home in California. Both theories are based upon sightings of her allegedly boarding private aircraft.
Speculation has it Anthony may further delay her probation by appealing the Judge's order, and would probably escape probation until the matter is resolved in appellate courts.