Arrest Made - 17 Pounds Of Marijuana Confiscated 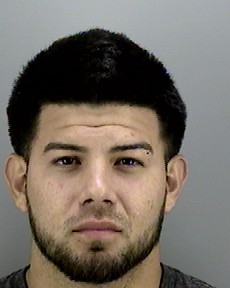 LABELLE, FL. --  On Friday, August 30, 2013 at approximately 3:25 pm, members of the Hendry County Narcotics Unit conducted a controlled delivery of a package suspected of containing marijuana at a North LaBelle home, which resulted in the arrest of a 24 year old man.

A narcotics investigator, posing as a parcel serviceman, delivered the suspicious package to 610 Caloosa Estates Drive., in North Labelle, which appears to be a rented home occupied by the subject.

After a short period of time, Narcotics Investigators witnessed a white Jeep driven by the suspect, 24 year old David Ramirez Jr. pull into the driveway of the home.

Investigators witnessed Ramirez pick the package up and take it inside the home. Approximately 15 minutes later Ramirez stepped outside the residence to speak with a guest who had arrived. Investigators then approached the house and detained Ramirez in the home.

At that time Sheriff's Investigators conducted a search of the home and located approximately 17 pounds of marijuana, with a street value of $17,000.00, inside a red duffle bag.