LABELLE, FL. -- A mystery Boeing 737 or 757 jet has been seen flying around and through heavy rain and thunder storms the last week around the LaBelle Municipal Airport and over the city of LaBelle in the area of western Hendry and Glades counties.

A video of a unique Honeywell International, Inc. Boeing 757 spotted at Hollywood International Airport in Fort Lauderdale a week ago may be a clue to what was flying over LaBelle this week. (Note the pylon attachment to the front upper starboard fuselage at 45 seconds into the video. It's used to mount test engines on. There is none mounted now.) 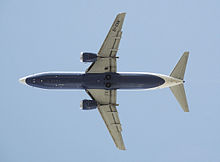 Spotted by dozens of citizens during the last few stormy and thunder filled afternoons, the jet aircraft has been flying at a low altitude estimated at between 1,500 and 2,000 feet over the city of LaBelle and Port LaBelle. It seemingly was trying to fly under and around the stormy clouds that have been popping up this week, flying through heavy rains and among frequent lightning bolts. 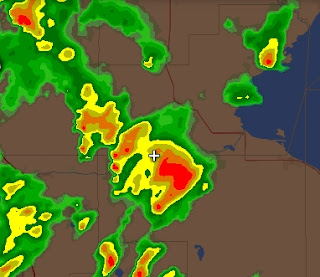 Normally, aircraft would not legally be flying seeemingly randomly near storm clouds or in the extreme weather as has been observed when this jet plane has been flying around the Hendry and Glades county area..

Speculation says the aircraft, apparently on a VFR flight, on visual flight rules might be a government operation studying storm behavior, lightning or winds at low levels, or in fact is the Honeywell 757 shown in the video above. An ordinary flight would not attempt risky storm flying like this say local pilots.

Update: If the mystery  aircraft is the Honeywell Boeing 757, it arrived in Fort Lauderdale at Hollywood International Airport on August 9 from Gila Bend Air Force Auxiliary airport, after having flown from Phoenix Sky Harbor Airport where it is based. Speculation: It has some sort of Air Force equipment aboard to test. 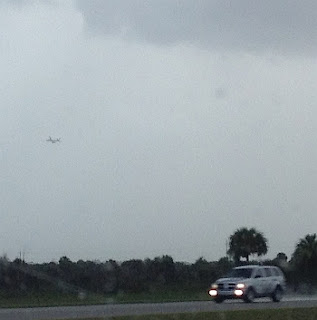 The flight out of Fort Lauderdale in the video above clearly shows a third engine is not mounted on the pylon where one normally is mounted for testing, indicating the plane is testing something else at low levels in thunderstorms, and not a test engine.

On August 10, according to FAA flight plan records it made a 19 minute IFR flight around afternoon storms and returned to Hollywood International.

On Monday, August 19 it made a 2 hour and 56 minute IFR flight flying among storms over western Palm Beach and Broward Counties between Fort Lauderdale and Pahokee at an altitude of 1,500 feet. The distance between the two cities is 60 miles.

Jacob Kyser of Sarasota captured this photo of the mystery jet while traveling on the Tamiami Trail (US41) across the Everglades on August 17. Kyser, a pilot, said it was very unusual to see a jet flying that low,which he estimated at about 900 feet, around storm clouds. He said the plane appeared to be nose up as if in slow flight.

Update 2: Steve Brecken, Director, Global Media and Analyst Relations for Honeywell Aerospace said in a comment to the blog, "Honeywell's Boeing 757 test bed aircraft has been conducting wind shear testing in South Florida over the past week.

"The Everglades and Florida's predictable afternoon summer storms provide an optimum testing environment for our research and development aircraft. The information gathered during these low level flights will help improve aviation safety and benefit the flying public for years to come."