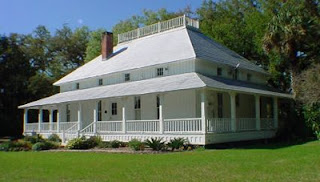 LABELLE, FL. -- LaBelle Heritage Museum volunteers will welcome holiday visitors to the historic Captain F. A. Hendry House at the west end of Fraser Street on Monday, December 19, Tuesday, December 20, and Thursday, December 22, from 6 to 8 o'clock in the evening.

The house was the last LaBelle area residence of Captain Hendry and his wife Ardeline Ross Lanier Hendry prior to failing health necessitating a move to their Fort Myers home where both died in 1917.

The Fraser Street home built for the Hendrys by brothers Ben Franklin Magill and James Madison Maginll in 1914 and is the only remaining physical link to Francis Asbury Hendry's 50-odd years in the Upper Caloosahatchee Valley where he named a small settlement in the late 1880s "LaBelle" in honor of two of his six daughters, Laura Jane and Carrie Belle.

Laura married Charles Waddy Thompson, and several of their Thompson, Williams, and Taylor descendants live and work in the LaBelle/Felda area.  Belle married Edward L. Evans, and a number of their Evans and Alderman descendants continue to live in the Fort Myers area.

Hendry's sprawling Fort Thompson ranch house and his first LaBelle house built in 1902 along the river on the east end of LaBelle, and after the sale of his Fort Thompson holdings to E. E. Goodno are a fading memory to all but a handful of longtime LaBelle residents.

Driving directions to the Hendry House for those not familiar with its location is to turn north from Hickpochee Avenue (State Road 80)  at the Log Cabin Barbecue onto Hardee Street, proceed two blocks until Hardee dead-ends at Fraser Street, then turn left onto Fraser.  The entrance to the Captain F. A. Hendry House is a short block west at the end of Fraser Street.

There is no admission charge to the Hendry House during this special holiday open house; however, all donations to LaBelle Heritage Museum will be appreciated.
Posted by Don Browne at 10:33 AM