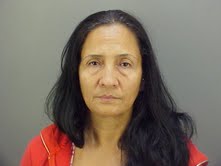 CLEWISTON, FL. -- A Clewiston resident has been arrested on charges resulting from a marijuana grow house bust.

Hendry County Sergeant Jarred Hunt reported to narcotic investigators that he had received information from a concerned citizen that the residents of 539 West Alverdez Avenue were growing marijuana and at the same time stealing power from the Clewiston Utility Department.

Narcotics investigators conducted a search warrant at the residence of Hilda Zamora. Once inside, investigators located one of the rooms covered by Mylar reflective material. In another room, investigators found 17 live marijuana plants totaling 44.5 pounds with an estimated street value of $44,000.00.

They located an air conditioning unit, homemade electrical breaker panel and seven transformers providing power to the room. Clewiston Utility personnel were able to locate the power diversion and estimated the theft of power to be over $300.00.

Hilda Zamora was taken into custody and transported to the Hendry County Sheriff’s Office where she was charged with Grand Theft, Producing Marijuana, Possession of Marijuana with Intent To Sell or Deliver, Trafficking in Marijuana and Possession of Drug Equipment.

Jose and Hilda Zamora own the modest 1962 home and a commercial lot at 831 E Alverdez.