How To Steal Electric And Water? Smart Meters 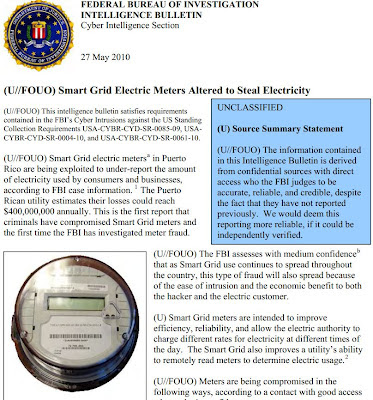 LABELLE, FL. -- In a recently made public May, 2010 FBI bulletin, news has been released about an investigation in Puerto Rico where individuals were able to modify so-called "smart" meters to lower their electric bills.

Utility companies including electric and water utilities have recently been installing electronic meters at customer homes and businesses. Instead of manually reading meters, the new digital smart meters can be read remotely.

Hackers have discovered using magnets or specially built optical devices can modify the meter reading ability and read less water or electric than is actually being used by the customer.

A Puerto Rican utility company asked the FBI to investigate theft of power and resulted in the finding of alterations being made to the digital readings of the electric meters. In that case, the FBI said employees of the meter manufacturer and power company employees conspired to charge customers $300 to $1000 to modify the meters to show less electric being used.

The method required an optical converter device attached to a computer to modify the meter. Another possible way, says the report, is to place a strong magnet on the meter which interferes with the ability to measure power being used.  Customers would typically place the magnet on the meter during times of high usage and then remove it later, so the company would still see some utility use but save the customer up to 50% off the normal bill.

In Hendry county, the Port LaBelle water utility replaced it's original meters several years ago with the new digital smart meters. Florida Power and Light has plans to gradually replace all it's customers meters with smart meters over then next few years. Some customers have already received their new meters in Port LaBelle.
Posted by Don Browne at 9:19 AM