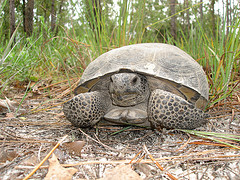 Florida Restores 36,000 Acres For Tortoise Habitat
Like a baseball player stretching muscles and practicing skills during spring training, the gopher tortoise is emerging from winter dormancy and moving slowly and steadily through the landscape in search of greenery to eat and a new place to dig its burrow.

Look for gopher tortoises’ distinctive domed brown shells and stumpy legs, as these land-dwellers make their way through Florida’s open canopy forests and sandy areas. The Florida Fish and Wildlife Conservation Commission asks people to remember that gopher tortoises are good neighbors, and can live from 40 to 60 years, so leave them and their burrows alone.

“The Florida Fish and Wildlife Conservation Commission works with, and is grateful to, the homeowners, landowners, businesses and public agencies willing to share their lands with gopher tortoises and their burrows,” said Deborah Burr, the FWC’s gopher tortoise plan coordinator.

In Florida, it is illegal to harm gopher tortoises or their extensive burrows, which provide shelter to more than 350 other native species. Generally, the only time people should pick up and move a gopher tortoise is to help it get across a road. Remember, though, not to put the tortoise in your car. Do point the tortoise in the same direction it was going when you picked it up, but never put it in the water because it is a land animal.

“This state has made progress in reversing the decline of gopher tortoises by providing direction to developers, including re-locating tortoises if necessary, and help to people interested in making room for tortoises.”

The best long-term protection for this state-threatened species is the people who are aware of gopher tortoises’ needs and happy to share their lawns and lands with the tortoise.
Posted by Don Browne at 8:22 AM