MOORE HAVEN, FL. -- Plans are changing quickly as a Naples property owner scramble to get permission from the Glades County Board of Commissioners to build a Sports Car facility in the midst of residential neighborhoods in quiet Port LaBelle.

Developer Armboz, Inc. will appear before the Glades County commission as it's first step to get a change of zoning and will later have to get Commissioner's permission to build a sports car facility in Port LaBelle.

The video above gives an example of what may be built in Port LaBelle if developers gain a preliminary zoning approval of Glades county officials this week and final approval at a later date for the developer's complete project plans.

(Video: Autobahn Country Club Track, Joliet Illinois. Note speeds of up to 105 mph around the track.)

Armboz, Inc. has filed applications to change the zoning of 74 acres of Glades county from agriculture to residential. The broad category "residential" would allow the developer to place 518 housing units instead of the current three houses allowed on the 74 acres and allow commercial development including stores.

The Glades county planning commission has already voted approval and recommends approval by the Glades Commission this week. Disapproval arguments of the project is expected to be voiced by community groups at the meeting.

Armboz bought the property, consisting of 274 acres in Hendry and Glades county in May 2011 at a foreclosure sale at the Hendry courthouse.

The land use requested is "for housing with density of up to 7 units per acre. Uses  may also include  low-intensity non-residential  uses such  as neighborhood  commercial  uses including restaurants,  barbershops, convenient  food stores, movie rentals,  houses of worship,  public parks and plant nurseries; existing cemeteries;  private child care centers and nonprofit  private clubs of a fraternal or social character."

The developer claims several times in their application that the former golf course at the site was "unsustainable"  and the "property needs a redesign to be successful and add value to Glades County and the Port LaBelle Community." They then claim the homes to be built will "lead to greater compatibility with surrounding residential uses by buffering them from the Motor Sports Club and adding similar uses along the perimeter."

A surprise entry in the application indicates the developer wants to build a 50 room hotel at the site along with a "kart track", never mentioned before at previous public discussions. 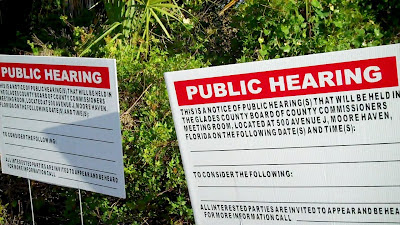 There may a problem with the public meeting notices to the public. Totally blank small plastic signs of a "public hearing" were only posted on one side of the property far from the roadway along SR80 and did not include any meeting information or contact numbers.

A traffic survey is included with the application and a habitat survey stating "The property is located within the FWS's Audubon's crested  caracara  (Polyborus plancus audubonii)  consultation  area, Therefore,  a formal  survey for this species will be conducted between January and March  pursuant to FWS survey guidelines, The Audubon's crested caracara is listed threatened  by both the FWC and FWS." The latest survey for that species was not included in the application provided for the Commissioners to view.

A public meeting is scheduled for 9 a.m. Tuesday, April 10 at the Glades County Courthouse in Moore Haven. Expected opposition to the Armboz application will come from the three main property owner associations in Port LaBelle, including the Ranchettes, the town house and condo associations, and Laurel Oaks homeowners association.

The entire project owned by Amrboz would permit 1,158 housing units. In an effort to appease adjoining complainant neighbors, they claim in their application that they intend to only build a "maximum of 300 units." The offer however, probably would not have the force of law if they changed their minds later and applied for the maximum number of units.

There are already 375 platted units in the existing subdivision, with 1,158 allowed.

Armboz has not addressed the issue of noise, as dozens of high speed cars drive around the tracks within yards of existing homes in the current residential area, and easily within earshot of homes for miles around the proposed tracks.

Armboz' intention is to build a facility for wealthy high performance sports car owners, who would have access to two on-site tracks, a kart track and a 50-unit hotel at the site. They say they "the community that is proposed will not be marketed to primary home buyers."

Similar sports car "driving parks" in other areas of the country are located outside of residential areas because of the tremendous noise generated by the high powered engines, and modified exhaust systems.

In a comment about the users of the facility, they say "It ís therefore expected that there will be no generation of permanent resident school age children, Àny primary home buyers of child bearing age attracted to a community such as this would be minimal."