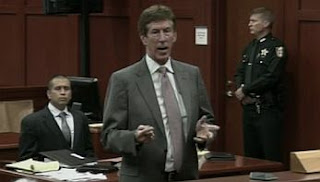 Out Of State Residence May Be Allowed

SANFORD, FL. -- Accused murderer George Michael Zimmerman appeared in Circuit Court in Sanford, Florida this morning at 9 a.m. for a hearing on the possibility of being released on a $15,000 bond as requested by his defense attorney.

Zimmerman is in jail for the February 26th murder of Trayvon Martin and facing life imprisonment if convicted by a jury.

Assistant State Attorney Bernardo de la Rionda represented the state of Florida in prosecuting Zimmerman and asked for no bond and opposed any bond less than $1,000,000.

Mr. Zimmerman said his son was not violent and would tend to "turn the other cheek."  Cross-examined by the Assistant State Attorney, Mr. Zimmerman commented on his son's previous 2005 arrest, saying he never read the police report, but said he was aware his son was required to do anger management courses, but believes his son does not have an anger problem.

Mr. Zimmerman described his son's wounds the night after the February incident, when Trayvon Martin was killed, saying he saw a swollen face and wounded back of the head. George Zimmerman alleges Martin attacked him.

Gladys Zimmerman, a Peruvian by birth and the mother also testified by phone.  She said the family doesn't have much savings but has some equity in their home which they could pledge for a bond.

O'Mara questioned Investigator K. D. Gilbreath, testifying as one of the two lead state attorney's office investigators who filed an affidavit that lead to Zimmerman's arrest for murder. Questions were asked about an interview of Martin's girl friend five weeks after the event. She was allegedly on the phone with Martin during the night of his death.

O'Mara questioned the wording of various sentences and choice of words in the affidavit and questioning on how the investigator knew the facts to be true. Questioning also ensued about how Martin's mother was asked to identify a 911 recording of a voice calling for "help" while Zimmerman's parents were not asked to identify the voice. Zimmerman alleges it's his voice, Martin's mother alleges it's Trayvon's.

Rionda aggressively pursued the allegation that Zimmerman had followed Martin, and continued following after the police dispatcher told him he didn't need to follow Martin.

Gilbreath admitted to O'Mara that he didn't know who started the fight between Martin and Zimmerman and there was little evidence that Zimmerman followed Martin other than a witness claims to have seen someone about the same time go by their residence. Admitted was Zimmerman told police within an hour and a half, he was attacked and assaulted by Martin.

Gilbreath had no evidence to dispute Zimmerman's claim he was assaulted first. He did say in response to a question by the judge, that the shooting took place as the two were in "close proximity" evidenced by powder burns on Martin's sweatshirt.

Zimmerman claimed to police Martin put hands over Zimmerman's nose and mouth so he couldn't breathe and bashed his head against concrete. Rionda attempted to allege those facts did not make sense from the evidence presented.

O'Mara asked why the investigator had not looked at Zimmerman's medical records showing a broken nose sustained that night. The records were offered to Gilbreath after the hearing.

Zimmerman, wearing a dark suit and tie, but bound by leg and arm shackles, made a 10 second statement to Martin's parents, taking the witness stand, saying he was sorry about the death, and did not know Martin was not armed.  Martin's parents were in the courtroom. Rionda again aggressively attacked Zimmerman on the stand.

Concluding the hearing, the judge said "this a common type hearing," and "run of the mill" hearing and found $150,000 bond is sufficient, and GPS will be required for monitoring, and allowed Zimmerman to be allowed living in a secret place for his protection, and if the state, corrections authorities, and defense can agree, he may be allowed to live out of state.

Another court hearing will be scheduled for next Friday, April 27.

photo credit: CNN/In Session
Posted by Don Browne at 11:19 AM