Unbelievable Past Of Hendry Clerk Candidate

Republican Contender For Hendry Clerks' Office - An Arresting Past

LABELLE, FL. -- On March 20th, Larry D. Wilcoxson submitted his intention to run for the Clerk of the Court for Hendry County, Florida. He opened his campaign with $100 of his own money. He has yet to file 161 petitions required for his candidacy, due at noon May 7th. Or pay a $6,018 filing fee in lieu of petitions.

Wilcoxson, 33 years old, a Republican, in the past associated with the Tea Pary of Florida, ran in 2010 for the Florida House in District 101 in Collier county.

With no political experience other than his failed 2010 run, and none managing a department as large as the Hendry Clerk's office, Wilcoxson hopes to take over the office occupied by Democrat Barbara Butler.

Wilcoxson has a Master's degree in Divinity from Martin University, the only predominantly African America university in Indiana and a degree in Criminal Justice.

While having no real experience in managing a large budge and Clerk's office, Wilcoxon does have some familiarity with the court system.

He was arrested in 2006 charged with three counts of child molestation in Indianapolis, Indiana. Wilcoxson was a substitute teacher at Longfellow Middle School.  The alleged victim was a 13-year old girl.

He had previously been fired for allegedly exposing himself to a female school custodian at Indianapolis' Donnan Middle School while he was substitute teaching there, according to press reports.

In 2010, during a press interview he responded to the molestation charges saying he was targeted by police who roughed him up and used racial epithets during an investigation of the sexual molestation case, to which he claims to have had no connection. 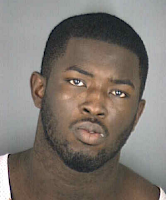 In August 2003, Collier Sheriff's deputies arrested Wilcoxson AKA "Scooby" Wilcoxson for charges of aggravated assault with a deadly weapon and aggravated battery with a weapon. He spent almost a month in Collier jail until he bonded out on $20,000 bail. The state attorney dropped the charges in October.

In 2006, Collier county records indicate Wilcoxson was the defendant in several traffic cases and a paternity suit.