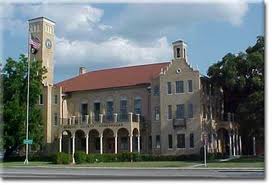 County Courthouse Evacuation Plan To Be Reviewed After Incident

A week later, Lupe Taylor, Hendry's Emergency Management Director said the only information she received was that  "a call came in as a Bomb threat to the Clerk’s office and the Sheriff’s office was called."

The call came in at 3:24 pm and it was cleared at 5:24 pm, she said. The Hendry Sheriff's office evacuated the building and did a search. A search resulted in nothing found, she said.

Emergency Management responded after hear the call on the radio, Taylor said.

She noted in a letter to the County officials, "Hendry County has a Courthouse Evacuation Plan and I will send you the document. This document needs to be updated and I am in the process of setting up a meeting to update it and planning an Exercise/Drill for the Courthouse and Administration building."

The Hendry Sheriff's office did not respond to a request for information.
Posted by Don Browne at 11:52 AM