What's Up At LaBelle's Heritage Museum 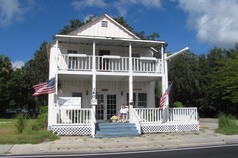 Pat Johnson will present another interesting and informative class on soap making on Saturday morning, October 20, at LaBelle Heritage Museum, 360 North Bridge Street, starting at 9 o'clock. Registration is limited to 8 people ages 16 and up so, call LaBelle Heritage Museum (863)674-0034 early to reserve your spot in the class. The fee is $10.

The museum is open from 9 o'clock in the morning until noon on Mondays, Tuesdays, and Saturdays and also on Thursdays and Fridays from 1 p.m. to 4 p.m. Admission is free for LHM members and children aged 6 and under. There is a $3 per person charge for all others.
Posted by Don Browne at 8:07 AM