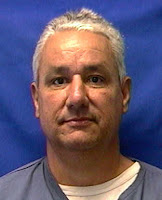 From The Archives - Ten Years Ago - Druggist Arrested

CLEWISTON, FL. (July 18, 2002) -- Many people have bought drugs from this well-known Clewiston businessman over the years legally, and now authorities claim illegally.

Owner of the J and J Pharmacy of Clewiston, Juan Ibietatorremendia (mug shot photo left) was arrested in a Ft. Lauderdale suburb, charged with trafficking inhydrocodone (a synthetic painkiller derivative of codeine) in an amount over 28 grams and less then 30 kilos, possession of cocaine, and possession of cannabis in an amount less than 20 grams.

Hydrocodone is an analgesic prescription drug with potency similar or greater than that of oral morphine. Illegal use of this drug has increased four-fold in the last several years. The drug is abused by oral administration rather than intravenously.

Hydrocodone is a powerful painkiller that can produce a calm, euphoric state similar to heroin or morphine. Experts say addiction can occur withn one to four weeks at higher doses. Authorities says hyrdocodone, as a cause for visiting an emergency room, have increased dramatically in recent years. The DEA believes hydrocodone may be the most abused prescription drug in the country.

Ibietatorremendia is the co-owner of L&J Drugs with Lazaro Ibietatorremendia, and co-owner of J&J Drugs in LaBelle with John Munson, according to Florida Secretary of State records. L&J Drugs was incorporated on June 19, 2002, one year and 12 days after a final divorce decree from former wife Michelle, a licensed massage therapist.

Ibietatorremendia has had his share of difficulties in the past few years, including a divorce finalized a year ago, and a recent petition against him for an injunction for protection against domestic violence filed by girlfriend Roberta Munson, 43 and ex-wife of Ibietatorremendia's business partner John Munson.

Drug abuse reported
According to court filings by Mrs. Munson, Ibietatorremendia spent nights at her home at 202 Ft. Thompson Street in LaBelle. Munson alleged in court papers that Ibietatorremendia has a serious drug abuse problem, and alleges numerous domestic violence acts against her, culminating in a May 17th incident, after which she filed for court protection against him.

He later apologized for his actions against her and promised he was "going into rehab," she said, alluding to his drug abuse problems. She said he recently wanted to borrow $20,000 from her, and ironically earlier bought her a ring valued between $14,000 and $24,000 but tried to take it back. She said he "tried to rip the ring off my finger" while they were driving down the highway while his 12-year old son was in the backseat.

Munson said she pulled Ibietatorremendia from a local motel room he was occupying with a black man, alluding to a drug encounter. Later, she said Ibietatorremendia slapped her while she was taking a shower, and threatened her to "never take him away from drugs."

On another occasion she claimed "he tried to run over me, my daughter and her friend, in my brand new BMW." She says the Clewiston Police came to arrest him but, "I asked that he not be arrested because he's my source of income."

Munson claims drug store irregularities and drug stupor
Munson asked the police to investigate Ibietatorremendia for the "serious drugs going out the back door of the Clewiston (drug) store. It is my understanding there are more drugs going out the back door than the front, not to mention, more than half the time Juan's so strung out he doesn't even show up for work. The store is being run by a 'tech' and few employees. This is against the law."

On June 3, County Judge Sloan denied the Munson petition for an injunction, but noted that "each needs an injunction against each other" and said a mutual restraining order would be granted if both agreed. Ibietatorremendia objected to the court's suggestion.

Details of Ibietatorremendia's arrest first appeared on the Broward county Sheriff's official webpage earlier this week. By week's end the information had mysteriously disappeared from the website database.

Update: Ibietatorremendia was incarcerated on July 15, 2002 and released from Hendry County Correctional on July 2, 2008.  He was sentenced to a seven year prison sentence for drug trafficking.
Posted by Don Browne at 8:26 AM