Can Hendry Commissioner Taylor Ever Lose? 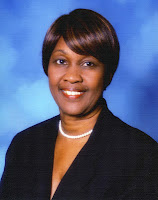 CLEWISTON, FL. -- In what seems to many, a possibly 'lopsided' competition, Hendry County's long-time District 1 Commissioner Janet B. Taylor will go against candidate Pamela B. Jackson Tuesday at the polls.

Both Taylor and Jackson are residents of Harlem, the predominantly African-American community southwest of Clewiston and both Democrats.

The decision of all District 1 voters Tuesday, regardless of party affiliation, will decide who gets the Commission seat. There are no Republicans on the ballot for that seat.

Pam Jackson has been attempting to lure voters to cast their vote for her on Tuesday's ballot. Unfortunately for Jackson, the uphill climb for votes begins at the Clewiston polling place. All those voting in person in District 1 will be voting at the "Janet B. Taylor Auditorium" on Olympia Street in Clewiston. It's the official polling place for District 1.

One of a few buildings in Hendry county named for a living person, and the only one named after a sitting Hendry Commissioner, the Taylor Auditorium stands as what can be called a "permanent campaign sign" for Commissioner Taylor.

It's unlikely any candidate now or in the future can beat that "free" advertising, barring a scandal, or changing the name of the city's auditorium.

The only other major local seat to be filled by voters on Tuesday will be District 4's Hendry School Board seat. The winner will be chosen Tuesday among candidates Stephanie Busin, John Perry, and Cynthia Luevano Potter. All other local winners on the ballot Tuesday will go against their competition from the opposite parties in November, along with all other candidates who had no other same party competition.

Southwest Florida Online had previously invited all local Hendry candidates to submit their biography for publication. Two candidates responded, Mark Chamberlain and Kevin Drummond.
Posted by Don Browne at 7:22 AM