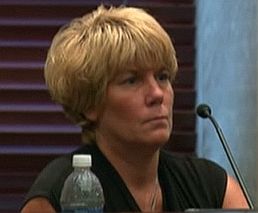 The murder trail of Casey Anthony, accused of murdering 2-year old daughter Caylee continued Saturday with follow-up testimony from ex-boyfriend Anthony Lazzaro, followed by questioning of Cynthia "Cindy" Anthony, mother of the accused.
Lazzaro read from text messages between himself and Casey Anthony. Anthony had suddenly left his apartment after Cindy Anthony came to get her, followed by a surprise police search of his apartment, and then Casey's brother Lee Anthony coming to pick up Casey's clothing and laptop computer.
Bizarre text message between Lazarro and Anthony, indicate Caylee is still alive according to Anthony, Anthony blaming herself for the missing child. The defense claims on the date of the text messages, Caylee is already dead by drowning, while the prosecution says she is dead by murder.

(photo: Cindy Anthony testifies at daughter's trial)
Mrs. Anthony, a nurse, is questioned about her history, and ultimate move to Orlando, Florida from Ohio. August 9th 2005 was the birth date of her granddaughter Caylee, and Mrs. Anthony says she didn't know about the pregnancy until June, and after finding out, the family was told. She says she was looking forward to the birth, planning a baby shower, preparing a "Winnie The Pooh" themed room and telling other relatives.
Mrs. Anthony began to weep when showed a photo of Caylee's bed and a Winnie The Pooh teddy bear and later upon seeing a photo of Caylee's sand box and picnic table in the family's backyard.

The last time she saw Caylee was Father's Day June 15, 2008, having watched a video with Caylee and Casey of her father who at the time was in a hospice.

Mrs. Anthony said she believed Casey was employed at Universal Studios in Orlando as an event coordinator. She said Casey would wear a lanyard with her photo ID on it and explained she also saw emails and text messages from her employer as well as photos of Casey at the amusement park, although said the photos were taken before Caylee was born.

Mrs. Anthony believed Casey went to work as usual at Universal on June 15, 2008, the day after Caylee's last sighting by the family.

She heard about "Zanny," Caylee's mysterious babysitter first in 2006, but said she never met her.  Zanny moved around from place to place "quite frequently" she said. The Anthony's later tried to find Zanny upon the disappearance of Caylee and gave up the search six weeks ago she said.

Casey told her Caylee would be staying with Zanny on Monday, July 16, and Casey would stay at Zanny's when she returned from Universal Studios. Casey and Caylee was scheduled to return back home on Tuesday, July 17, but Casey said some work schedule prevented her from returning and they were to stay at Zanny's again.

They would not return on Wednesday, Casey saying Caylee would be going to Tampa's Busch Gardens with Zanny, and told Mrs. Anthony they would be back home Saturday, June 21. Mrs. Anthony said there was always some reason why she could not talk to Caylee during the week.

Then the plan changed to a return for Monday, June 23. Casey, on Monday night then told her Zanny had a car accident and Zanny was in a Tampa emergency room.

On Tuesday, June 24, an Anthony backyard shed was broken in to. It later turned out Casey and Tony Lazarro had been together all week in Orlando, and had broken a lock to get to gas cans in the shed. The Tampa trip was a lie.

Although Mrs. Anthony had daily contact with Casey, it turned out the lies were continuous, while Casey lied about where and who she was with during the following weeks.

A July 3rd Universal Studio trip and Jacksonville visit related by Casey to Mrs. Anthony also turned out to be fabrications, as well as the Zanny accident in Tampa. Now Mrs. Anthony was becoming suspicious and asked son Lee to see if he could find out where she was.

On the evening of July 3rd, she started an online page on MySpace to express her feelings and reach out to Casey, after becoming angry about the lies from her daughter, not realizing that anyone could see the online page. Judge Perry would not allow the page to be shown to the jury or questions to be asked about it.