Without Jury Present Lazarro Says "No" Abuse By Father 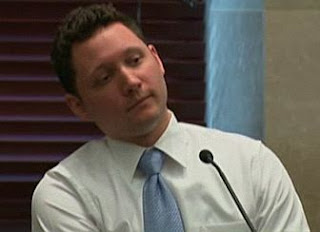 Update May 26, 2010: In testimony Thursday afternoon without the jury present, Tony Lazzaro told the court that Casey Anthony had told him, her father George Anthony had "hit" Casey when she was a child.

He says he thought of it as child "discipline," answering "no" to questioning by defense attorney Jose Baez whether Casey had shared with him any thing about sexual abuse in the past from Casey's father.

During the same questioning, he told the court that Casey had told him that her brother Lee had attempted to touch her "chest" once in the past but she didn't let it happen. He said he didn't know what age she was.

Attorney Jose Baez in opening statements Tuesday told the jury that Casey Anthony had been molested by both her father and her brother. The judge will decide later whether to let the jury hear Lazzaro's testimony on what Casey had told him.

Casey Anthony's boyfriend had earlier testified for the prosecution Wednesday afternoon in her Orlando first degree murder trial. Either a life sentence or death penalty may be Anthony's fate at the conclusion of what may be a very lengthy trial during May and June.

Anthony "Tony" Lazzaro says he met Anthony through Facebook, finally meeting her in person where they "hit it off." Lazaro said he found her on Facebook in May 2008, and requested to be a Facebook "friend."

Anthony Lazzaro told the jury he was a student at Full Sail Univertiy, a music business school in Orlando at the time he met Anthony. He was living with three male roommates at the time in a small Orlando area apartment.

Anthony visited his apartment frequently and starting in mid-June 2008, when Anthony's daughter was missing, was staying overnight every night in Lazzaro's room.
Testimony established that Anthony's daughter Caylee had visited Lazaro's apartment only a few times, and never stayed overnight, although Casey did sleep there. Caylee was said to be staying with either Cindy Anthony or a nanny named "Zanny" who Anthony paid $400 per week, according to what Anthony told others.
Anthony, as his girlfriend, helped Lazzaro in his promotion business as he tried to bring customers into Orlando area clubs. Testimony centered today on the Fusion restaurant, where Lazaro and Anthony helped bring in customers. The Fusion was a sushi restaurant during the day and turned into a club at night.

Anthony posted notices on Facebook and by word of mouth, attempting to get her friends to visit the club. One witness said none of her friends ever visited, however. Employees at the Fusion, including "shot girls" testified that Anthony was seemingly normal during the June-July 2008 period, even as her child was missing, and not mentioning any problems to anyone.
Lazzaro says Anthony had told him she worked at Universal Studios. The same story was told to other witnesses, where she was telling friends she worked as an event planner.
Testimony today by prosecution witnesses uniformly showed Anthony never mentioning the disappearance of her daughter to any of her friends or co-workers at the club she was promoting in the month since her daughter's disappearance.
Descriptions of Anthony's behavior during the June to July 2008 period, when Caylee was missing, were described as normal, friendly, and not ever showing any sadness, worry, or anger.
Several witnesses described Anthony during this period as a "typical" girl in her 20s, and one mentioned her being a "party girl," always friendly, outgoing, and happy.

On July 16, 2008 Lazzaro said he went to an Orlando Blockbuster video store with Anthony. The defense and prosecution have stipulated that a video showing what appears to Anthony and Lazzaro can be entered into evidence to be shown the jury. Anthony reportedly was telling her parents she was out of town July 16.

On June 16th the defense is claiming 2-year old Caylee Anthony had died in a swimming pool accident.

Lazzaro described Anthony as being happy that night. He never saw her scared, crying, acting nervous, and had not told him Caylee was missing. Casey stayed at Lazaro's apartment every night after but did not bring a suitcase or anything of Caylee's.

Lazzaro testified that on the night of June 16th Casey did not make any phone calls, but she would routinely go outside when making a call. Lazzaro "played hooky" from school the next day saying he "didn't want to leave the bed." Anthony never gave Lazzaro any indication anything was wrong, he said.

On June 19th he and Anthony went to look at an apartment to rent, around the block from his current one, but Anthony did not look at the apartment because "she didn't have identification with her," Lazzaro said.

During one club event, Anthony entered a "hot body" contest wearing a blue dress. The photo was entered into evidence and shown to the jury.

Lazzaro said his role at the club during the contest was "security," to make sure no one harassed the bartender or female employees. Lazaro notice no change in Anthony's demeanor and he still had not been told Caylee was missing.

The story of Lazzaro picking up Casey after she ran out of gas, taking her to her parent's house to get some gas was related to the jury. Casey said she didn't have a key to the shed where the gas cans were and used his tire iron to break into it. He said he was concerned but Casey told him it was no problem since it was her house.

A second time, Lazzaro was called on to help Casey with her car that had run out of gas. At the tine Lazzaro was told Casey's father would take care of it, and left the car behind. Lazzaro never saw the car again. Later evidence will show the car was towed away.

On cross-examination by defense attorney Jose Baez, Lazzaro was asked about any threats Casey might have made or any weapons she had. He answered "none" to all.  Baez asked if he had seen Casey buy any weapons on their shopping trips, or chloroform, duct tape, etc.

Lazzaro told Baez he had only seen Caylee two or three times, one time at the apartment complex pool, noting Caylee enjoyed being by the water.

Baez asked about a "secret" Casey had shared with Lazzaro. Baez started to ask him about her saying she had been abused by her father George Anthony, but the prosecution quickly objected as the question was hearsay, and Judge Belvin Perry sustained the objection. The question remained unanswered.

Lazzaro admitted, in cross-examination he had worn a "wire" for the authorities in some unstated connection with Casey's brother Lee, and cooperated with them, including having his phone tapped. He said he made no money from the publicity of this case.

Attorney Baez asked the Judge to introduce a photograph explaining that he didn't want to ask Lazzaro to have to come back to Florida to testify again. The mystery photograph of an Orlando street location was allowed to be shown to Lazzaro but not to the jury.

Baez notified the Judge that he needed about 20 more minutes to finish his cross-examination. Judge Perry elected to recess until tomorrow, noting that the jury had requested to work on Memorial Day but the county courthouse may not be able to open due to budget constraints.
Posted by Don Browne at 3:38 PM