Settlement Made In LaBelle Church of God Sex Abuse Lawsuits

Alleged Victims Settle With Church and Former Youth Leader
LABELLE, Fl. -- The Law Offices of Jason Turchin in Weston, Florida today announced that a settlement has been reached in two civil lawsuits filed on behalf of two young teens allegedly sexually abused by their Youth Leader at the LaBelle Church of God.
The church organization called Church of God Florida State Offices, Inc. and Edwin Nathan Smith were defendants in a negligence civil suit brought by the mother and grandmother of the alleged victims in March and April 2010, according to Hendry Circuit Court records. The names of the children and the plaintiffs are confidential.
"It is with great satisfaction that these settlements were reached, to get justice for these young girls and to help them heal from their trauma," said Turchin. The terms of the settlement are confidential.
The lawsuit was based on civil claims stemming from the arrest and conviction of Edwin Nathan Smith, (dob 9/14/82) a one-time Youth Leader at the Labelle Church of God in Labelle, Florida. Smith was convicted of Lewd or Lascivious Battery for the sexual assault of one of the minors, and Lewd or Lascivious Molestation of the other young teen. 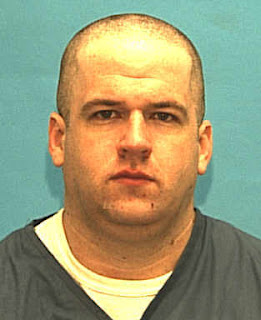 In December 2009 Smith (photo above) was found guilty of lewd or lascivious battery, lewd or lascivious molestation, and battery. He was sentenced by Circuit Judge Christine Greider to 14 years in prison on the 1st charge, 1 year in county jail on the 2nd, and 10 years probation on the 3rd. He is incarcerated at the Moore Haven Correctional Facility.
Smith's wife divorced him in 2009. She was the daughter of the Pastor of the church at the time.
The Plaintiff's sued the Church of God Florida State Offices, Inc. because they had reportedly hired the church pastor.  The Plaintiff's were planning on amending to complaint to add the local LaBelle Church of God as well, but a settlement agreement was entered into by the original defendants.

Florida law permits civil claims for crime victims for those who could have prevented or otherwise contributed to the lewd or lascivious acts. "In the criminal case, the focus is on punishing a criminal for committing crimes against the State of Florida," said Turchin. "In the civil case, we focus on the crime itself. Could it have been prevented? Was it foreseeable?"
The settlement brings closure of the civil cases to all parties, said Turchin.
Many victims of crimes, especially those victims of sexual assault, rape and molestation, may not be aware that they may be able to pursue a civil claim independently from the criminal case. Florida law may allow a victim to pursue a civil claim for pain and suffering, emotional trauma, counseling and therapy expenses, and other damages. said attorney Turchin.


Previous story on the Smith Arrest:
http://swflorida.blogspot.com/2008/10/church-of-god-responds-to-arrest.html
Posted by Don Browne at 5:05 PM