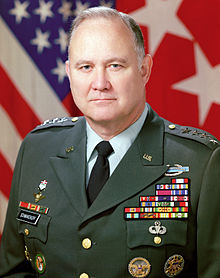 TAMPA, FL. -- General H. Norman Schwarzkopf, Jr., 78 died December 27 in Tampa, Florida where he had retired after service in the U.S. Army. He was born in Trenton, New Jersey, the son of Ruth Alice (née Bowman) and Herbert Norman Schwarzkopf. Sr.

Schwarzkopf reportedly died due to complications from pneumonia.

He retired from active service in August 1991, and shortly thereafter wrote an autobiography. In retirement, Schwarzkopf served as a military analyst for NBC, and began promoting prostate cancer awareness, a disease with which he was diagnosed in 1993, and for which he was successfully treated.

Schwarzkopf donated most of his time to multiple charities, and community activities. He sat on the board for Remington, and several other high-profile corporations. On May 4, 2008 Schwarzkopf was inducted into New Jersey's Hall of Fame. He was also an honorary board member of the Multiple Myeloma Research Foundation.
His father, H. Norman Schwarzkopf, Sr. served in the US Army before becoming the Superintendent of the New Jersey State Police, where he worked as a lead investigator on the 1932 Lindbergh baby kidnapping case before returning to an Army career and rising to the rank of Major General.

In January 1952, Schwarzkopf's birth certificate was amended to make his name "H. Norman Schwarzkopf". This was done as an act of revenge against the upper class cadets at West Point because his father hated his own first name "Herbert."

Schwarzkopf, Jr. was a member of Mensa.

He is survived by wife Brenda and children Cynthia Schwarzkopf of Lithia, Florida, Jessica Schwarzkopf, and Christian Schwarzkopf.

Source: Wikipedia
Posted by Don Browne at 5:42 AM