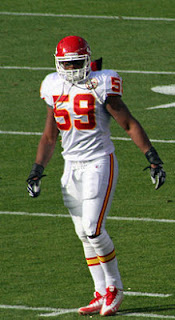 Belcher Kills Girlfriend, Then Commits Suicide In Front Of Coach
Kansas City police said NFL linebacker for the Kansas City Chiefs, Jovan Belcher shot and killed his girlfriend, Kasandra Perkins in front of her mother Saturday morning, then drove to the team's practice facility next to Arrowhead Stadium, where he fatally shot himself in the parking lot of the team complex, in front of head coach Romeo Crennel and general manager Scott Pioli.  Other team personnel were also witnesses to the suicide.

Belcher, 25 years old, was re-signed by the Chief in March 2012 and had started in 10 of 11 games this season.  He grew up in Long Island, New York and attended college at the University of Maine.

Update:
In an emotional and controversial setting, the Chiefs won the game Sunday at the half-filled stadium. NBC broadcaster Bob Costas, used his segment on "Sunday Night Football" to urge gun control. He said in part, ""In the coming days, Jovan Belcher's actions and their possible connection to football will be analyzed. Who knows? But here, wrote Jason Whitlock, is what I believe. If Jovan Belcher didn't possess a gun, he and Kasandra Perkins would both be alive today."