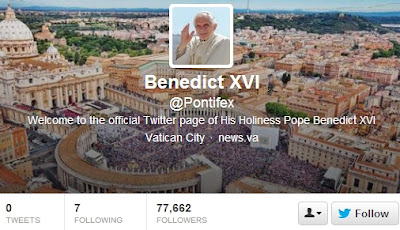 The Vatican has announced Pope Benedict XVI will be launching a new Twitter account for the public next week.

On Wednesday, December 12th the Pope is expected to tweet his first 139 characters to the world. The Twitter account is open now showing 77,662 followers, while the Pope is following seven people at the moment.

The Pope "goes live in eight languages to start with" according to Vatican Radio, and the official name or handle for English language users is simply @pontifex.

The Pope hopes "to try and share the Good News of Christ with those seeking answers to life’s key questions on their computers, ipads, tablets or smartphones."

With now over 500 million people having Twitter accounts and at least a quarter of them using it as their means of daily communication, the world can send questions to the Pope on issues of faith, some of which he’ll try and answer with his first tweets that you can watch in real time during his general audience that day in Rome.

Twitter’s director of social innovation, Claire Diaz Ortiz told Vatican Radio “As a company it’s important for us to have influential leaders and the Pope is perhaps the most important religious leader in the world who’s joining our platform. We’ve seen great work done by other religious leaders in terms of what it means to reach so many people, so we’re eager and hopeful the Pope will be able to connect with believers and non-believers alike”
The Vactican says Benedict himself won’t be worrying about the technicalities and won’t be seen regularly checking his account, but he will be selecting the messages to tweet and sees it as a vital way of promoting a more personal and active dialogue of faith with men and women today.

Mgr Paul Tighe,  secretary of the Pontifical Council for Social Communications said in an announcement today. "I think symbolically this is very important, this is the head of the Church going into a new digital arena to share his words and ideas."

"When the Holy Father is working on sermons or talks he’ll give explicit attention to how to formulate a shorter message that will be tweeted in his name, maybe with the longer Url attached."
Posted by Don Browne at 9:44 AM